IR seekers can detect sun heated surfaces of the hull and superstrucure of a naval vessel.

Ships are equipped with water spray systems that cover the superstructure for fire suppression and NBC (nuclear, biological, chemical) wash down. These spray systems typically do not provide coverage of all ship surfaces (for example, the hull). Full coverage requires the fire and NBC sprinkler system to be augmented.

Furthermore, not all ship surfaces are exposed to sunlight at a given point in time, either because they face another direction, or because they are shaded by other structure. If a shaded part of a ship is washed down, it can cause the IR signature of the ship to degrade due to negative contrast with the background.

The Davis AHC system solves these problems by independently washing down zones of a ship based on real-time measurement of surface temperatures. The AHC system is custom designed for each ship class so that regions of a ship with similar thermal characterstics (for example, surfaces oriented in the same direction) are grouped into the same zone.

AHC is controlled by the Davis Onboard Signature Manager (OSM), a wall mounted console which graphically displays system status and current surface temperature readings. The operator can manually activate AHC or configure the system to turn on automatically when the ship enters a threat state.

Benefits of the AHC system include: 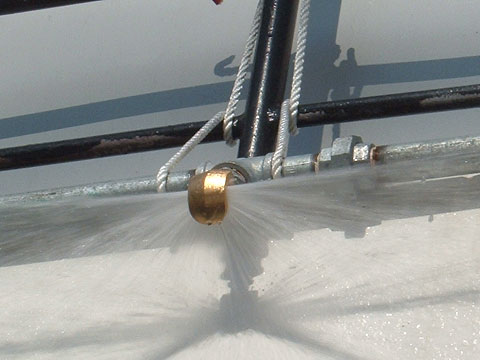